Dubai off the beaten track – day 2

Mall of the Emirates and Ski Dubai

The day begun at Mall of the Emirates checking out the indoor ski slope. For 200 AED you can ski for two hours including ski rental and clothes. Of course there are activities for those who don’t ski and of course they have a ski shop just outside for those wanting to get away from the 30 degree heat outside, but still I couldn’t help feeling that it was all too strange. All the expensive stores didn’t help either – never been my cup – and seeing the H&M sign I realized it’s time to go… to the beach! 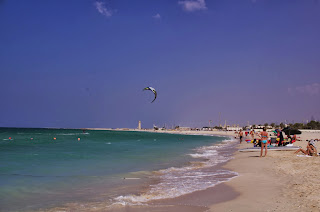 After being to the Kite Beach I realized I just have to learn kite surfing! Only three days to go in Dubai, but I should manage! By the way, Kite Beach is a really nice place even for those who don’t surf. Nice sand, shallow waters and public toilets and showers, all for free. But with no kiting teachers in sight – I am told that they usually turn up in the afternoon – I took a taxi to Al Karama for lunch and to buy some t-shirts and underwear. 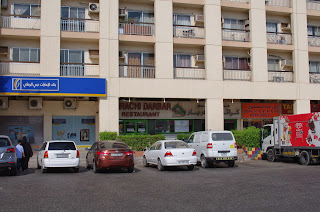 I started off having lunch at the Indian restaurant Karachi Darbar at the end of the Karama shopping street. The restaurant came recommended by my friend amd seemed popular among the locals. I can only agree, 16 AED of fine tasting food and I could hardly get out of my chair.

If you like some cheap shopping Al Karama is the place to be. Authenticity not guaranteed, but bargaining is. Most of the stores sell items such as bags, watches clothes, etc, and what they don’t have in the stores the more inventive salesmen (I saw only men) fetch from other stores.

When I got what I came for I took the metro back to the Noor Islamic Bank station and a taxi to the beach – it’s located straight towards the ocean from the station, as you might need to inform the driver, not the most popular taxi destination. One of the kite surfing schools have a container on the beach – Extreme Watersports Dubai (http://www.dubaikitesurfschool.com/) – and the guy there gave me a business card and told me: “Boss, 8 plus two hours to learn, 300 Dirham per hour, call me tonight”. It sounded bit expensive to me but he sticks to his price, so what to do?

So I went for another swim, took some more photos and dreamed of when I can surf on the waves like a pro! After a while it was time to go training Thai boxing. I was lucky that I left in time, because finding a taxi here is not easy, and I couldn’t even find one on the big street Jumeirah rd, so 40 minutes later I was back at Noor station with sore feet. 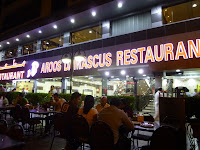 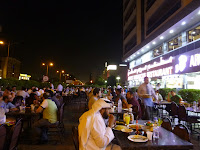 Another popular diner among the locals is Aroos Damascus close to Salah Al Din metro station. Dubaians eat late so it was no problem that we showed up at eleven and the restaurant is still packed. It was nice and cool outside, only 25 C, and we enjoyed the Arabic food. It strikes me that even though alcohol is forbidden in all restaurants except for the better hotels, people still seem to enjoy going out to eat… very unswedish of them. Dinner was 75 AED for two, and stuffed we tried to use the metro but it closes between 11 pm and midnight depending on station, so we had to take a taxi back.