Dubai off the beaten track – day 3

Started out the day visiting the Dubai Museum (3 AED en trance), which gives a brief history and insight into how people used to live in the city and the dessert. Its best trait is that it isn’t overloaded but just the right size to keep me interested – but compared to other national museums it’s a fart in the universe.

Afterwards I tried to find the Bastakia Quarter, and maybe I found it, but it’s hard to tell given that I wasn’t fully aware of what I was looking for. I was however the only westerner in small alleys crowded by silk and cloth shops, so I must have found something.

I had lunch at Joyrs Indian/Chinese diner. Apparently Indians have a taste for Chinese food so the combination is predominant. A vegetable byriani, lentil soup and juice (34 AED) was really good and more than I could eat. I guess the Indians love their rice as well.

On the way to the metro I found loads of cheaper shops, mainly watches, sunglasses and electronics, and got screwed by a nice guy who sold me a card reader for 75 AED, unwilling to bargain, only when I got home I found a price tag saying 45.

Two metro incidents to learn from

1. I got on a carriage, noticing how many women there was. Not totally uncomfortable with the situation I didn’t think more about that, until the next station when the police told me to get out of the women and children carriage.

2. Getting off the metro I could not find my ticket needed to get OUT of the station (I must have dropped it picking out my phone). I contacted the staff who said: “very serious, I got to fetch my manager”. The manager tells me that it is very serious and that he has got to give me a fine of 200 , I’m thinking euro and get a bit anxious. I told him what happened, and said that I’m just a stupid tourist that don’t know how to cheat. I got off with a slap on the wrist and a new ticket to use through the doors, “but next time you will not find someone as nice as me”.

All metro stations look the same 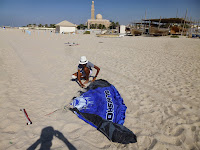 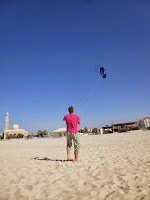 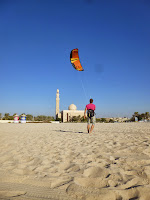 A little late I arrive at the beach and meet my instructor Charming Charlene (authors memory trick). Time to learn kiting, wohah! We started with the small kite, training to get it up, turning it and keeping it in zenith. Kiting is fairly easy at this stage, only three strings to pull: left, right and center. Still the kite crashes a couple of times and Charlene has to remind me to be easy on the wrists, stop pulling in time and to let go if it pulls to hard instead of trying to pull back.
After a while we go on to the full size kite and it is actually easier than the small kite since it’s more stable. Well, I crash that one too a couple of times but Charlene seems quite impressed by my progress (my interpretation) and says after two hours of practicing that we will go in the water tomorrow. 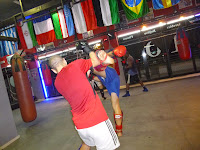 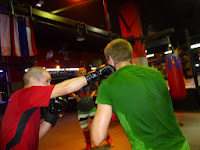 My last (this time) session at the Champion Club at JLT is sparring. After a tough warm up, we geared up. A strange thing is that most of the other guys didn’t wear a mouthpiece. In my first round I hurt my shin, an old injury reopened from contact with my opponents knee. So the rest of the two hours I was confined to using only my left leg when kicking. 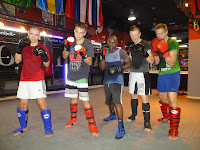 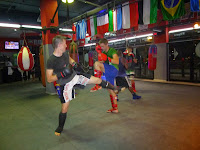 The guys were very kind and said that I was a good fighter and it was fun sparring again after two weeks of travelling. I hope to come back soon and maybe get even with some of them, or if they ever come to Sweden they have a standing invitation to my club back home. 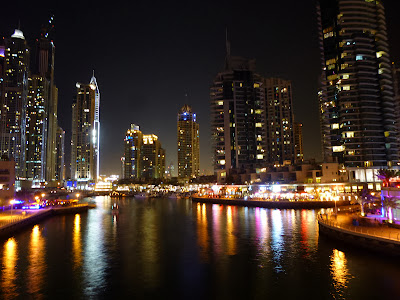 For dinner me and Andreas went to The Marina for some Chinese food. The Marina is among the fancier and more touristic areas in Dubai and several luxury hotels are located here and towards JBR Walk (Jumeira Beach Road) and the beach. The marina itself lies surrounded by skyscrapers and is probably – like most other things in Dubai – man made. The dinner is excellent but more expensive here than I have gotten accustomed to (120 AED for two). 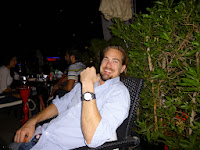 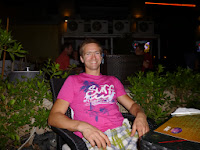 After dinner we walked to JBR Walk, and even though it’s only a short distance I recommend a taxi, because without Andreas I wouldn’t have been able to navigate between the skyscrapers. Easiest way to find a taxi is to walk through the Yacht Club and exit towards the street.

JBR Walk is where the rich come to show off, especially at night. Driving on the one way street is slower than walking, restaurants are priced double compared to the Marina and Italian ice cream the same as in central Rome. But if you fancy watching extreme and expensive cars, this is the time and place!

Advice: don’t take a taxi here and don’t make the taxi drivers drop you off here at night! It’s not fair to either part.